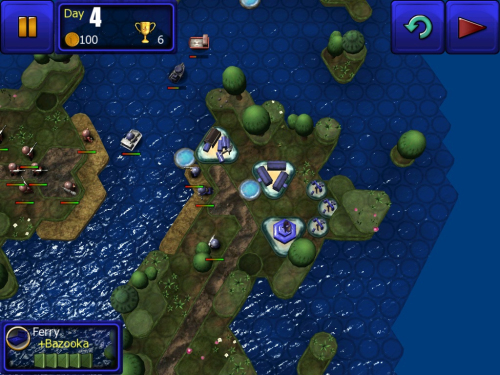 A deep, highly polished and addictive turn-based strategy game brimming over with humor, wit and a lot of heart, Great Little War Game HD, true to its name, is a gore-free and exciting take on the underrepresented genre of turn-based strategy.

The App Store is chock full of war games and war is well represented in tower defense, action adventures, first person shooters, and strategy games. As far as war games go, Great Little War Game HD travels down a path less trodden, trading the familiarity of one-on-one combat and tower-building in favor of something more complex but just as satisfying.

You start out with some money, a few units of soldiers to purchase, and a mission to accomplish. You earn money on a per day basis, and not per kill. Eventually, you will unlock engineers who can ‘capture’ production units and increase your daily income, but again, you only have a fixed amount of money to work with. You have to think carefully about which units to purchase and whether or not you will spend easily on cheaper stuff or wait for more expensive ones. This makes all the difference when it comes to strategy because you have to wisely make use of your resources, which factors in what units to use and how to maximize the ones that you’ve got.

As in TBS games, you get to have one move for location, and only one turn to fire at enemies for each turn. In Great Little War Game HD, the one who shoots first gets to inflict more damage. Positions can also be maximized for certain units, such as snipers, who do more damage from an elevated position. Later on, when vehicles become available, you can transport infantry from one point to another – which is really cool, by the way.

The campaign mode offers 20 missions with mission objectives to complete for each level. If you want more campaigns, you can purchase them via IAP – the devs offer bonus campaigns now and then, though. There’s pass-and-play and skirmish mode. In Skirmish mode, you pit your skills against the AI on a variety of maps, and the simple objective is to eliminate the enemy: 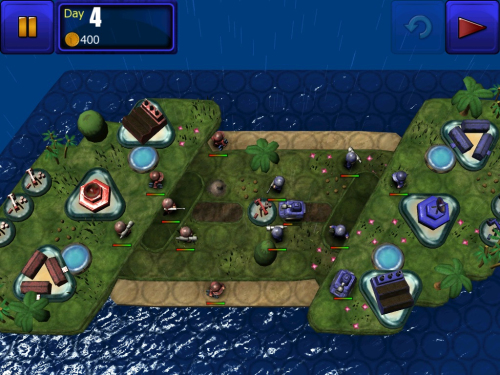 The game controls are smooth and the graphics are highly polished – the game’s overall cuteness belies of course, the inherently violent nature of war games, but it’s a welcome break from the usual. At the same time, the devs went all out to offer funny voiceovers and as of this writing, made their other voice packs free instead of IAP (in-app purchase). The fluid animation makes the action more exciting instead of the usual stilted movement as players take their position. Here you get the feeling that there’s some cat-and-mouse, wait and see feel to it as you pick off each other’s soldiers and vehicles one by one – minus the gore. What I also love about this game is the range of unit types available for land, water and air based combat, and the difference one could make for your overall strategy.