From the small screen to the big screen, the lovable Doodler holds its own. Should you still buy the iPad version if you already have it on the iPhone? appSIZED says “Yes.” 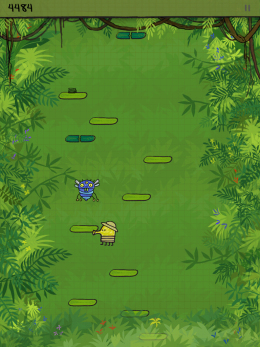 If you’ve ever played Doodle Jump on the iPhone or iPod Touch, you are probably wondering if you should spend another $2.99 on Doodle Jump for the iPad. Here’s what I can tell you:

Doodle Jump is one of the top selling iPhone apps of all time, and the adorable Doodler, for some time has only enjoyed the spotlight on a small screen. The iPhone version was such a hit for a number of reasons: its price ($0.99), the fairly regular content updates given for free, and the fun, unique “jumping” experience on a small device.

Not all ports translate well, but the transition from iPhone to iPad is very smooth, and at times, feels like the two versions had always existed all along. The graphics are definitely more detailed on the iPad, and seeing a bigger, cuter Doodler is always a plus. Controls wise, tilting and moving the iPad is just as easy. However, the initial jump can be a bit harder to do on the bigger device, and likewise, shooting at enemies is a bit more difficult on the iPad than it is on the iPhone.

Fans might be disappointed that other than the same themes found on the iPhone version (e.g. Halloween, underwater, etc.), only an iPad-exclusive multiplayer racetrack mode is the new, iPad only content currently available. I’m sure, though, that additional new themes will be provided, for free, in the tradition of the iPhone app.

I really love the multiplayer mode (via Game Center), which is a lot more fun on a bigger screen. I noticed, however, that whether on the iPhone or the iPad version, Game Center takes a long time before it works. I don’t know if it’s a problem on Apple’s part or the developer’s (Lima Sky). It would be nice to have a wifi or Bluetooth multiplayer option as well.

iPhone owners of the game might have wished that the game had gone universal instead, but Lima Sky has made it clear that the experience would be much better if the two versions were separate. In addition, there are plans for a sequel, Doodle Jump 2, which is another great thing to look forward to.

If you’re on the fence because you already have Doodle Jump on the iPhone, the price may feel a bit steep considering you’re getting more or less the same content. But, there’s nothing like aving an iPad version that feels natural and right at home and one of a kind for the iPad. Plus, it would be a nice show of support for our resident indie developers who’ve provided constant updates and additional content for free. If there are more themes coming, then $2.99 is a good price.