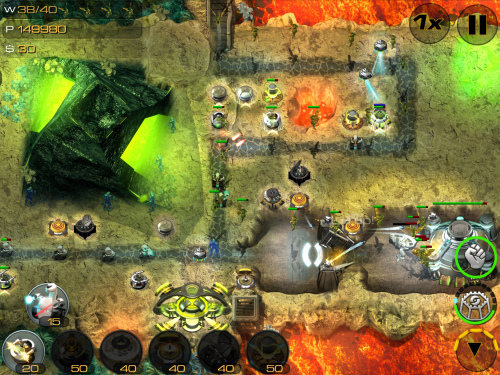 Sentinel 4 – Dark World is – as you guessed – the fourth installment in the series, focusing on an intergalactic power struggle for power and resources in a new and unfamiliar alien world. This is a familiar tale, but there are nice touches in the storyline such as recruiting as an ally a former enemy. Early on in the gameplay, you will notice that this is no ordinary TD game, but a rather sophisticated one with depth and complexity requiring quick thinking in managing resources and micro-managing units. 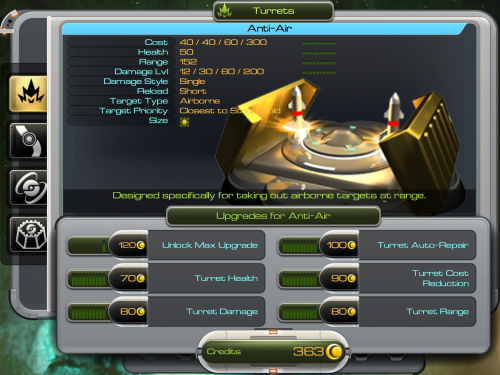 In Sentinel 4, you have a wide variety of towers to upgrade and unlock. These towers either target ground or air-based units, with your typical slowing tower, cannonball tower, etc. A nice addition is a tower that just heals everyone else, and one that reveals invisible enemies. During each level in the campaign you earn coins which you can use to upgrade health, damage dealt, etc. A particularly useful upgrade is auto-repair which comes in handy for towers that do critical work but get damaged a lot. 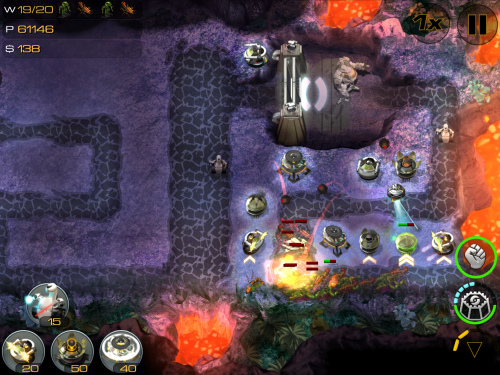 Aside from your usual towers, you also have a drone that’s effective for melee combat. You can place the drone directly in the path of incoming creeps, unlike towers, and the drones deal a fair bit of damage while surviving even the most crowded battleground. You also have barriers or gates to protect in addition to your main base, which is guarded by a mobile sentinel commander who serves as your supersoldier of sorts – the commander can jump from base to base and provide a much needed line of defense to protect your barriers or your main base. Your main base also harnesses resources and from there you can summon attack and repair drones for extra support. There are some extras such as earning interest (extra mmoney) from saving your gold – discouraging haphazard buying and upgrading of towers.

Sentinel 4 – Dark World is fast-paced and a lot more interesting and engaging than your average TD game, and rightly so, since Origin8 made a name for themselves with this series. It offers a deep system of upgrading and enhancing your towers, something many TD games lack. You can easily get a lot of hours of gameplay in upgrading your stuff, earning achievements and working out a strategy before going into battle.

I only have some minor quibbles about the game: one is the rather low res graphics (doesn’t look so nice on a retina display) and another is the lack of adequate information in the tutorial and help section, requiring additional effort to figure out some things. Some, I have yet to discover. 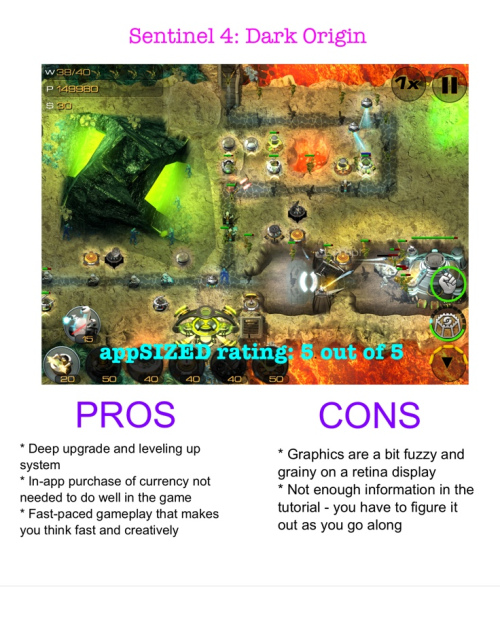 Minor quibbles, notwithstanding, Sentinel 4 – Dark World is an excellent tower defense game that focuses on solid but deep tower defense. It offers enough variety and complexity to keep you on your toes, and reminds us all about what gold standard TD gaming should be about.
Check out the report card below: