I don’t want to give the storyline away, but I certainly appreciated how it combines the paranormal and bizarre. In some parts, images are slightly hazy and dim, but there are parts of it that are suddenly bright, creating a sense of uneasiness all throughout. There are nice atmospheric touches all throughout, and of course, who has never been unnerved by broken dolls and shadowy figures that mysteriously pop up? Add to that a lot of tentacles and strange symbols and you’re good to go!
In many HOGs these days, I notice that there are more puzzles to solve than there are objects to hunt, I suppose, to keep things fresh. What I like about the hidden object aspect of The Cursed Ship is that you have manipulate certain objects to produce an item on your checklist. For example, say, if “bowl of soup” is on your list, you will find a ladle and a bigger bowl which you use in order to come up with a bowl of soup. It goes beyond parting a curtain or lifting an object to look for another one underneath. 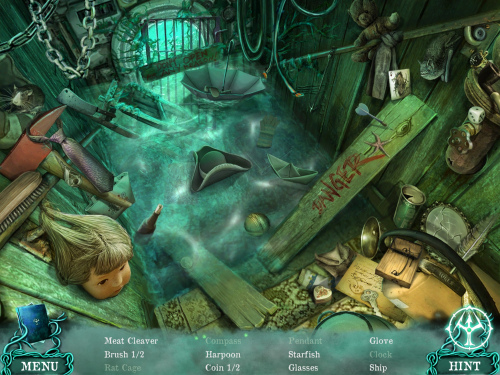 The puzzles themselves are not that hard, though I had to ask for some help in some of them. Puzzles mostly involve rotating objects or piecing together puzzles, and often require that you hunt for certain objects in order to activate them. There are some puzzles that require a bit of crafting, which is also a nice change of pace.
In The Cursed Ship you also come across broken or inactive machines and objects that require the same kind of object in order to use them, such as magnetic cards and tools. The narrator (you, basically) pokes fun at this and at some point even says: “I need yet ANOTHER tool to fix this.” (My beef with HOGs in general is that when you need to use certain tools to do things, the logical connection hunting for an important tool or object in another room to be able to do a certain thing with it is not always clearly established)
My only complaint is that the controls (indicated by small, glowing green circles) are a bit wonky, since they are often obscured by the inventory. It takes me a few tries to go from one location to another, which usually happens when I have to go back to a previous scene. A map would have been helpful to navigate the ship, but I don’t know if it was intentional on the part of the developers not to include this as part of the creepy, disoriented feel of the player, but it’s quite hard to keep track of what’s going on and where (as a result of which I rely on the hint button to point me in the right direction). 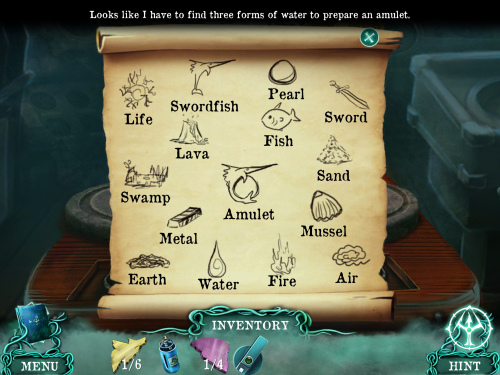 The Cursed Ship will last you several hours, even on easy mode, as in my case, which offers a lot of hints that recharge pretty quickly. You can opt to make the game harder by trying out expert mode, if you are good at these kinds of games.
The story is adequately disturbing and will stay with you until you move on to the next game. 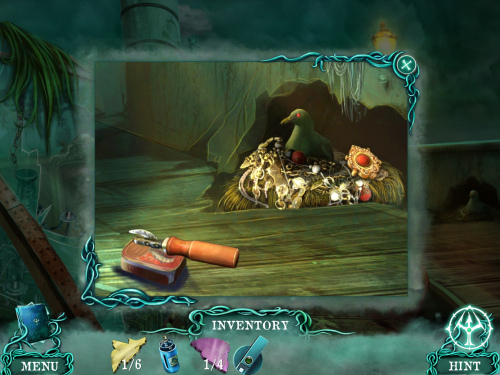 Although with some minor flaws, The Cursed Ship is an effortless recommendation for casual gamers.
Check out the report below: 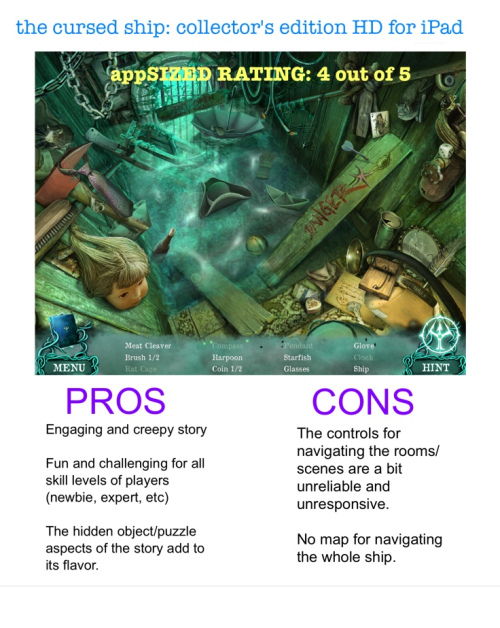