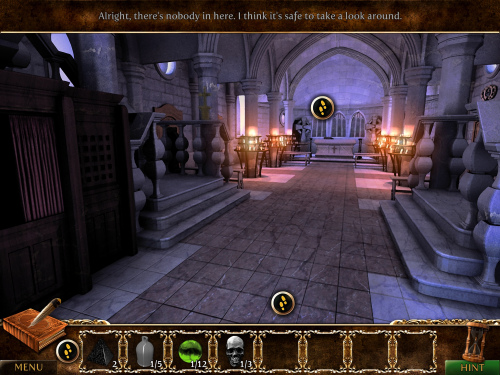 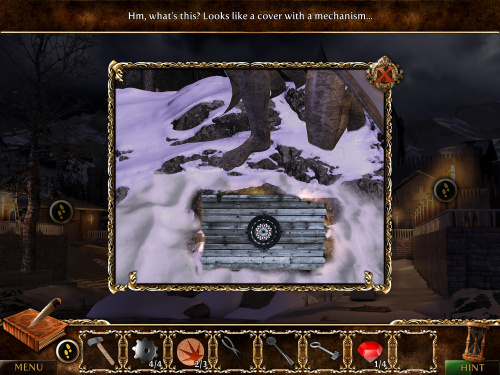 Digging into the main hidden object game (HOG) aspect, Where Angels Cry HD does not tell you what to look for. You can rely on hints in your journal (a staple of HOGs) which will give you clues on what to do and consequently, what to look for. If you raise the difficulty level of the game, you won’t have easy access to such clues. This part I find a bit difficult and arbitrary. If you don’t know what you’re looking for, you’re bound to tap away at every inch of your iPad screen until you stumble on an object. As additional clues, certain items or areas sparkle when tapped to let you know that there is something to be done here – be it a missing item or a puzzle to be solved. What I do appreciate here is that the map is fairly simple and it’s not hard to find your way around – something I’ve had a problem with when it comes to more complex HOGs.

The puzzles are not too hard, and may not seem that challenging to fans of hidden object games. Some types of puzzles repeat throughout the game (such as the kind where you have to move items on the left to get to the other side and vice versa) while others are a bit more interactive such as a match three type of game. The hint button on the lower right also doubles as a convenient skip button, if necessary. 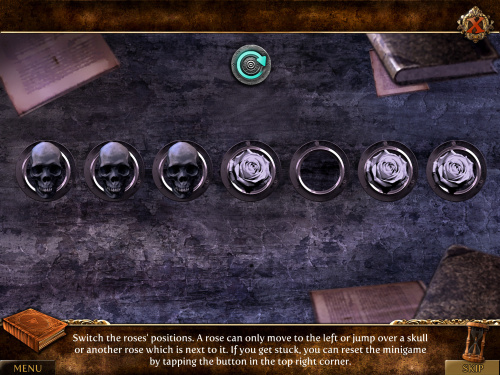 The graphics were okay but mostly static and inconsistent – some parts were nicely done but the human figures a bit sketchy and vague looking. However, the atmosphere is appropriately suspense-filled and creepy… I just feel that more could have been done to make the graphics and animation better. The voice acting was pretty good, though not exactly accurate – one character, an Italian kid, was speaking with an odd Scottish (well, definitely not an Italian accent) accent.

While the game itself is okay and intriguing for the most part, I found that as the story developed, it was quite problematic, exploring certain plot threads that weren’t explained well or connected to the overall storyline. The part I liked the least was the rather abrupt ending which felt tacked on and unsatisfying, not to mention weird.

Overall, I think the way the story was developed and executed affects overall enjoyment of the game. I think the storyline should have been developed more fully, and the puzzles more varied and imaginative. I would say there are better hidden object games out there, though this one would be more middle of the pack.

Copy: Provided by the developer/publisher

Price: FREE (with in-app purchase to unlock the full version for $6.99)

One comment on “Where Angels Cry in Review: A Hidden Object Adventure That Falls From Grace”