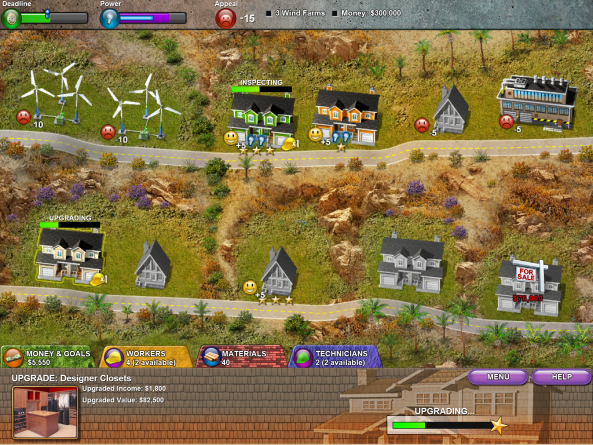 Keep track of your power consumption, make money, reach the level goals before time runs out!

As I write this review, the lights in my entire area have gone out. If you build one too many literally power hungry houses without a wind farm in place, you will find yourself unable to earn rent from the houses that your own and pretty much unable to build anything else. Shame on you for not being environmentally conscious about your real estate tycoon dreams. In Build-a-Lot 4: Power Source HD, the emphasis – as it should be, is on going green. Read the full review after the break!

The Build-a-Lot series should be familiar to anyone who’s played a building sim/time management game. Basically, you build, develop, buy and sell houses, recreational facilities and special equipment in order to achieve a particular set of goals each level. Mainly, profit is what you’re after, but there are various secondary objectives such as building a certain type of house or facility in order to accomplish your level’s goals. On top of that, you also have to be conscious about parameters such as appeal, which is brought down by building structures such as workshops and wind farms but increased by painting your houses or putting up recreational facilities such as tennis courts.

In its fourth iteration published by G5 Games, Build-a-Lot 4: Power Source HD focuses on power as a significant resource – meaning, you can’t build houses without thinking about the consequences on your limited power supply. Thus, you have energy saving measures such as building wind farms/nuclear reactors and installing energy savers in your own houses.

Build-a-Lot 4: Power Source HD is incredibly challenging. At the start of each level, you only have a certain amount of money, materials and manpower to work with. Depending on your goals, you’ll have to choose between expending a lot of materials first on building wind farms or if you go straight ahead and build houses anyway.

Originally a PC game, the iPad version of Build-a-Lot 4: Power Source HD capitalizes on the retina display, and graphics are nicely rich and detailed. It’s nice to see specifics of what you’re upgrading, say, hardwood floors or environmentally friendly LED lights. I also like the idea of painting houses, which at least allows you to customize your houses a bit. Although I think the overall design could be improved further, like the makeover undergone by similar building/time management games like Resort Mogul. If it happens, I just hope it will not be at the expense of oversimplifying the game mechanics (in the subsequent Mogul games).

Right now, Build-a-Lot 4: Power Source HD has a lot of little twists that make gameplay challenging and oftentimes frustrating, requiring more thought and strategy into the usual build-sell-buy scheme. The power requirement is a huge obstacle, I’ve found, to my usual ambitions of gaining expert scores on every level. On the other hand, I like the idea that you can buy houses and empty lots at a much lower cost if you artificially stimulate demand by putting your own properties on sale. You can also build facilities like bakeries and cinemas, among others, that will earn rent for you (not just the houses) but take more resources to build and longer to generate income. Meanwhile, the mayor in campaign mode has an annoying habit of throwing additional goals your way (as if there aren’t enough already). These are the very things, however, that make the game a lot more fun. However, if you don’t have the patience for it, the degree of planning and strategy required might feel a bit too demanding especially if you only have a few minutes to spare and are looking for something more casual.

Overall, Build-a-Lot 4: Power Source HD is a solid installment in the series and with 68 levels in total and fairly long playing times per level, you’ll find your hard-earned moolah well spent. 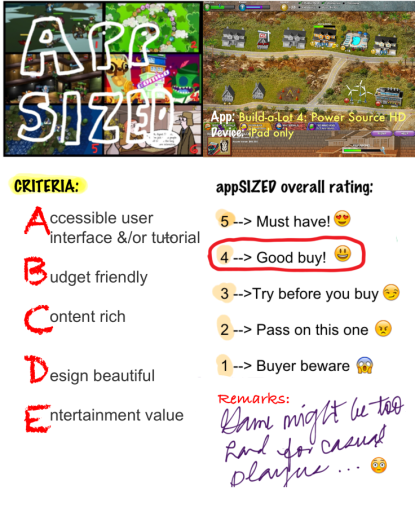 Copy: Provided by the publisher