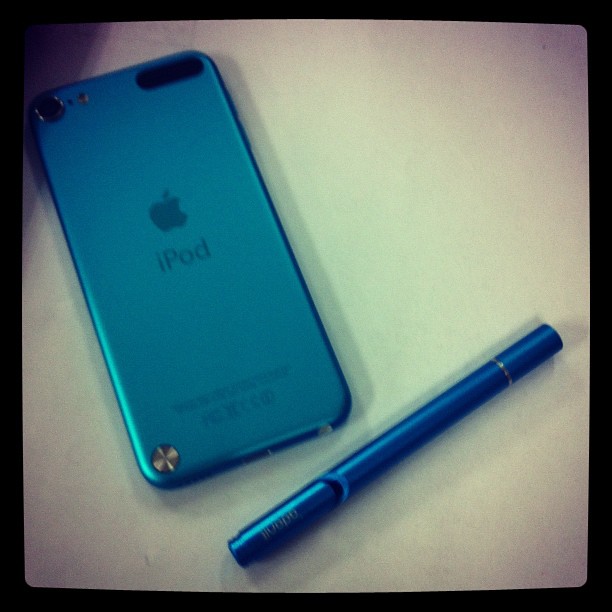 All but forgotten? The iPod Touch has been around since 2008, as a budget-friendly alternative to the iPhone. However, I must admit that when I stayed up to watch the (anticlimactic) iPhone 5 launch, it wasn’t the much hyped iPhone that caught my attention but its svelte, stylish sibling making a comeback – the all but forgotten iPod Touch.

When I chanced upon the beautiful blue 5th generation iPod Touch in an Apple Reseller store, it was love at first sight. Luckily, what started out as an impulse purchase became my boyfriend’s birthday gift to me. 🙂

happy birthday to me!

I know most people are set on upgrading to the iPhone 5. However, for those who are on the fence about upgrading their iPhones but would like to benefit from the iPhone 5 experience (taller display, better performance, thinner device, etc.), then this review is for you.

I’m a bit biased here, but I happen to love the fact that the iPod Touch now comes in an assortment of colors, namely: red, blue, green, salmon pink, white and black compared to the iPhone, which only has black/slate and white/silver. The anodized aluminium back of the iPod Touch beautifully wears these colors while the front bezel remains white (except for the black variant).

The splash of color on the new iPod Touches is reminiscent of Jony Ive’s early designs of the clamshell iBook, the iMac and iPod Mini. I imagine that he and the rest of the design team had a blast giving the iPod Touch a much needed makeover, and giving it a unique identity that its siblings, the nano and the shuffle have previously enjoyed.

The Touch Alternative: the iPhone without a Phone

Of course, the strongest argument for the iPod Touch has always been the fact that it is conceptually similar to the iPhone and often carries most of its features, except of course: phone capabilities, a built-in GPS and related apps that use GPS (the iPod Touch relies on your wifi connection to estimate your location). In an ideal world, the iPod Touch would have built-in 4G/LTE (like the iPad) but of course, that would be unlikely.

In any case, the iPod Touch has built-in wifi and is bluetooth-enabled for internet browsing, and runs the same apps as the iPhone. It has Siri, for one, and can video chat with other iPhone/iPod Touch users on Facetime and send photos/videos/messages through iMessage.

The camera of the iPod Touch now offers 5 megapixels, a huge upgrade over past iPod Touches. Photo quality is pretty good in my opinion, and with the flash built in (thank you, Apple!), you can treat your iPod Touch as a thinner and lighter Flip video that can take pictures. The matching wrist strap called a “loop” is also a nice add on, but part of me is worried it’ll fall off. 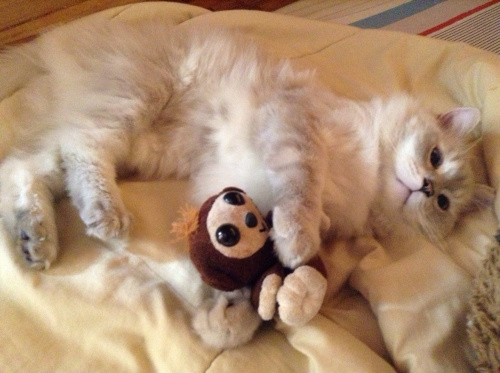 You can also treat it as a basic digital camera that offers quality photos and videos and lets you easily share them via Facebook or Instagram, for example, something that an ordinary camera can’t do right now.

I love the lightness of the iPod Touch in my hand. Having used mine naked for more than a week now, I can proudly say it’s scratch free and surprisingly resistant to fingerprints compared to my iPhone 4.

The taller display makes a huge difference. Having used an iPad for the last two years, reading on a smaller screen has become an alien experience to me. However, with the new iPod Touch, I find that I can even read eBooks and surf the internet with relative ease. 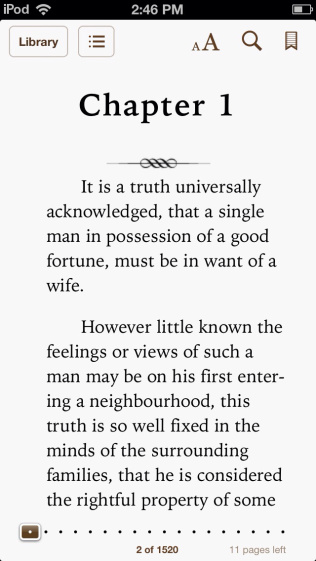 I also find that it’s much easier and more convenient for me to type lengthy notes using my iPod Touch. 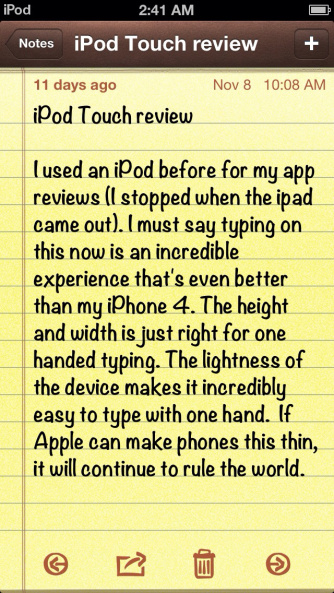 Battery life is pretty good. For moderate use, playing music, surfing, reading books, Facebook, Twitter, taking photos and videos and a few games, the battery life is quite impressive – mine in particular, has lasted more than a day at 50% capacity.

The fact that there is no battery percentage available sucks, though, because I don’t understand why Apple didn’t include the feature.

Since I have an iPhone 4 with only 16GB of space and photos and videos accumulated over nearly two years, having an iPod Touch to ease some of the burden on my phone’s capacity (and battery) is a godsend. My entire music collection is in my iPod, with plenty of space to spare for my photos and videos. On top of that, I wear out my iPhone less in terms of using it heavily for Facebook and Twitter.

In terms of apps and games, I tried out a few iPhone favorites on my iPod Touch. I experienced crashing, but I think it has more to do with compatibility issues between the apps with iOS 6.0.1 and not the iPod itself. Other than the app crashing on me, I’ve found that everything is pretty snappy and smooth with an older processor chip (compared to the iPhone 5) on the iPod Touch notwithstanding.

Not all games/apps are updated to take advantage of the 4″ screen yet, so for these apps, you’ll find them letterboxed. The ones that are iPhone 5/iPod Touch 5th gen ready look really awesome with the extra screen real estate. Doodle jumping is certainly more fun on the taller screen! 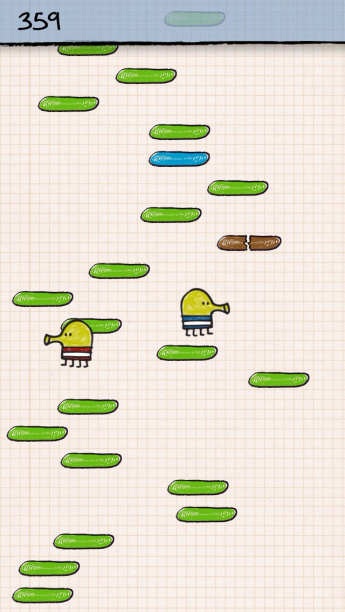 The loop is a bit of an oddity. I’ve tried using it a few times to take photos but the orientation is a bit awkward since the physical volume buttons which you can also use to snap a photo instead of the virtual one are on the other side of the device. Since I like having the loop to avoid accidental drops, I find that it’s a bit of an inconvenience when I want to play some games because I end up covering the speaker.

Speaking of speakers (no pun intended), the sound is a bit weak compared to my old iPhone 4, which is a bit of a disappointment. However, the EarPods (unfortunately, without volume controls) are a major upgrade compared to the stock white earphones from Apple, offering comfort for the ears and pretty decent audio quality.

The new lightning connector is a bit of a pain to deal with since I can’t indiscriminately swap chargers, but I have to admit, it’s much easier to work with since the sync cable is smaller but feels sturdier.

Gorgeous, powerful and attractive as it may be, the iPod Touch isn’t for everyone. Apple’s diversifying line of attractive mobile devices means you need to figure out what you want if you’re on a budget.

If you already have a phone that you’re happy with, the iPod Touch can also stand as a practical and feasible alternative to upgrading to an iPhone 5. With the iPod Touch you can enjoy the newer features of the iPhone 5 in a slimmer, lighter and more stylish package.

In terms of costs, the iPod Touch is still cheaper than an iPhone if you do not wish to be tied down to a 2-year contract with your local carrier, especially if you still have an iPhone under contract. I am skipping the iPad Mini this year because I already have an iPod Touch and a bigger iPad. A non-retina Apple device at this point with iPad 2 level specs doesn’t sound like a good buy to me.

While the iPod Touch is generally perceived as a gaming device for the younger set, an iPhone on training wheels, if you may, with this generation, it has made a worthy comeback that affirms its relevance. Finally, the iPod Touch has come into its own as a mobile device worth having. Buy it to double as a digicam, buy it to cure iPhone 5 envy, buy it as a gaming device or buy it because you love the color – you really can’t go wrong with this one.

PROS: Thinner, lighter and comes in beautiful colors; excellent build quality; cheaper than an iPhone 5 but has its best features; solid battery life and smooth apps and gaming experience; comes with goodies (EarPods and loop)

Posted with Blogsy
About these ads

4 comments on “Engineered for a Major Comeback: The iPod Touch 5th Gen in Review”