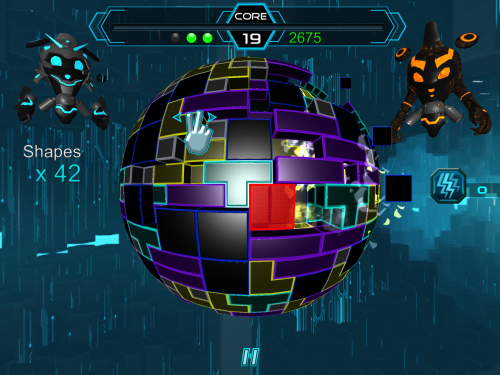 Puzzle games for the iPhone and iPad have taken on a whole new meaning for me – we have physics based puzzlers like Angry Birds, platform puzzle type games a la Lost Winds, and marble shooter/puzzle games like Zuma HD. Many prominently featured games on the App Store are categorized as puzzle games one way or another. Lately, I’ve been missing the regular types of puzzle games, the ones with pieces that are supposed to fit together and have a defined answer.

Shatter Crash is one such example. It’s a game that is unmistakably a puzzle game, but it’s so much more than that. 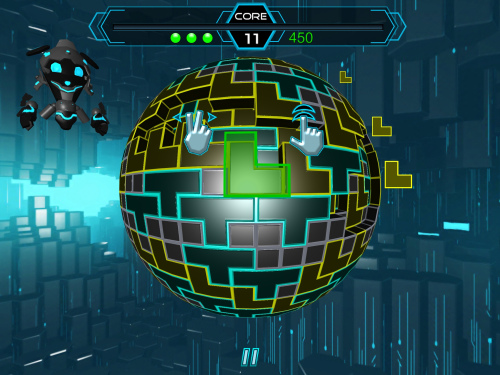 My initial impression of Shatter Crash was of its similarity to a childhood favorite of mine, Blockout because both games are variations of Tetris in 3D. In Shatter Crash, your primary objective as Stan the nanobot is to liberate your nanobot friends who are trapped within an infected computer mainframe in the form of a 3D sphere. The sphere is made up of layers of tetris-like shapes, and you need to “infiltrate” the core by removing these blocks through inserting their matching shapes. Match the wrong shape and you lose a life. If you take too long, you lose a life as well. Matching the right shape not only eliminates nearby shapes, it can also trigger combos (incredibly fun!). Likewise, you get a few more seconds before tackling the next shape. Take too long and you’ll end up with more blocks being piled up on the outer layer of the sphere, making it difficult to chance upon the right opening.

Shatter Crash does not stop there, however, thanks to its RPG element. You can purchase special power ups and upgrades to your ‘suit’ to make your combos score higher, buy you extra time, and eliminate more blocks effecitvely. I’ve noticed, however, that the power-ups and upgrades don’t seem to have much of an impact on improving my gameplay – quick thinking and some strategy is sufficient to beat a level. Even when the levels have become quite difficult, I find that the suits and power ups don’t seem to increase my chances beating the level. 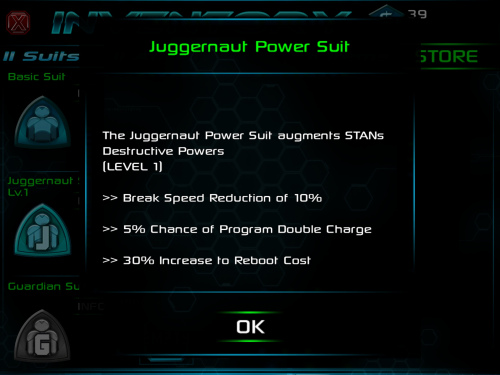 While the game starts out fairly easy, things get quite exciting quickly enough and I’ve replayed harder levels several times. At the same time, you have an incentive to replay levels because you have a secondary objective to attain, such as finishing a level with only one life left or completing it within a certain period of time.

The timed mode gives Shatter Crash an edge, making each level a nail biting, exciting experience. You have to think fast, otherwise, you will lose precious milliseconds because of indecision. However, I’m not a fan of the neon art style, but it’s really a matter of preference. The user interface is a bit bare bones, but you can pretty much consider the game as pick up and play since it’s pretty easy to learn. I don’t quite understand the mechanics of “moving” blocks (highlighted with green arrows and two fingers), and my attempts often result in an unintended placing in the wrong spot, which sometimes costs me a life.

I’ve found Shatter Crash to be incredibly addictive, a refreshing change from the myriad puzzle games out there. It’s definitely worth your time, so I recommend that you check it out. 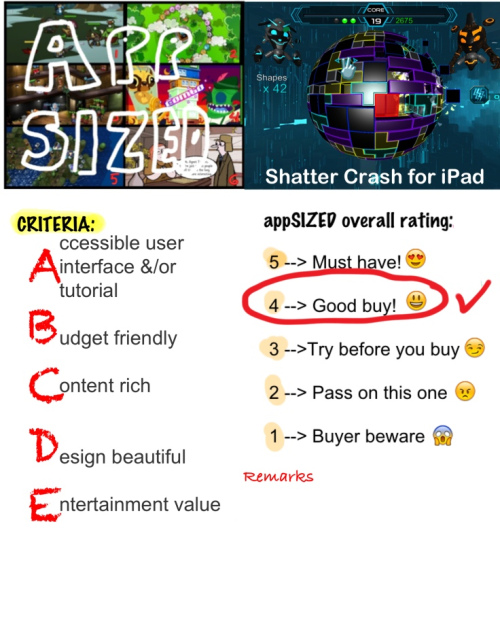 Copy: Provided by the developer for review

2 comments on “Of Bots and Blocks: Shatter Crash for iPad”