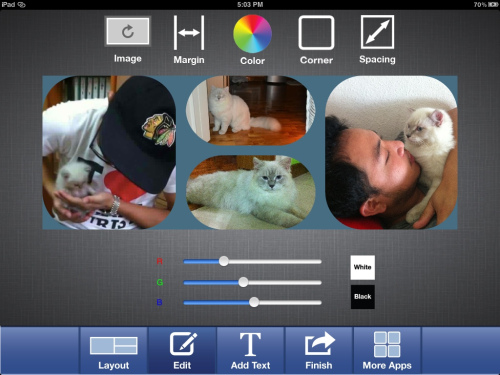 We choose our Facebook profile photos with care, displaying our photos which paint us in the best light. Cover photo opens up a whole new layer of expression and meaning, allowing us to share with people a photo that we like or made – a beautiful panoramic photo of a place we’ve been, a family portrait, our pets … The possibilities are endless.

Now that Facebook is set to roll out its Facebook timeline feature with a prominent cover photo as its centerpiece, many users will want to choose one major defining photo that’s even bigger than their profile picture. While having a statement cover photo is a fantastic idea, I find the cover photo feature rather frustrating to work with since there was no way to resize photos in such a way that the whole picture can be seen and not just some blown up part of it. Choosing a photo that will fit in Facebook’s irregular cover photo frame is quite challenging, if not outright difficult. Those with some photo editing knowhow will have to edit photos and customize them to appear properly in the Cover Photo section on Facebook.

Luckily, for non-photoshop users like myself, Cover Photo Maker for Facebook Pro+ – is a real godsend. It just made my life a lot easier and my Facebook profile page a lot easier on the eyes, too. 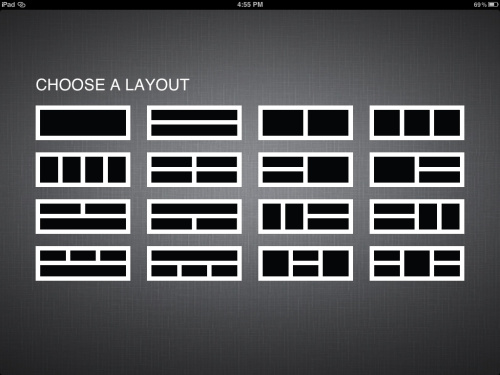 Set to the exact dimensions of a Facebook cover photo, the app saves you the time and headache of editing your own photo via Photoshop, for example, just to make sure that it fits the peculiar specifications of Facebook. At the same, you can put in more than one photo and customize the look of your cover photo using pre-arranged, customizable layouts. 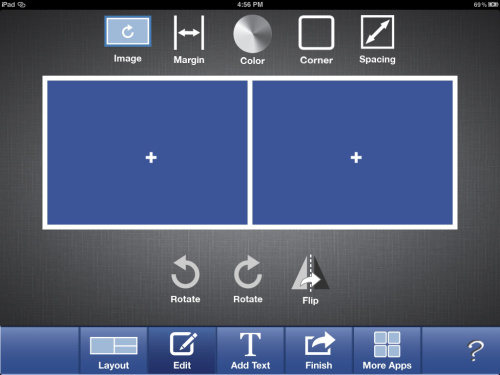 The app boasts of a relatively simple and clutter free user interface. You get to choose from a wide variety of layouts, frames and borders, and you also have an option to include text with your images. Photo editing, however, appears to be limited to rotating and flipping the images, so if you want to edit images individually to get a desired look, you need to go to another photo app first.

Photo manipulation and text editing can be a bit tricky when using the iPhone, but the iPad offers enough space to work with. At the end of it, you can export your image to your camera roll, send it via email or upload it to your Facebook account. 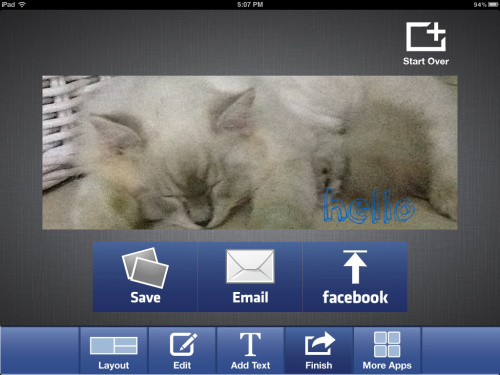 Voilà! Now you have your very own customized cover photo: 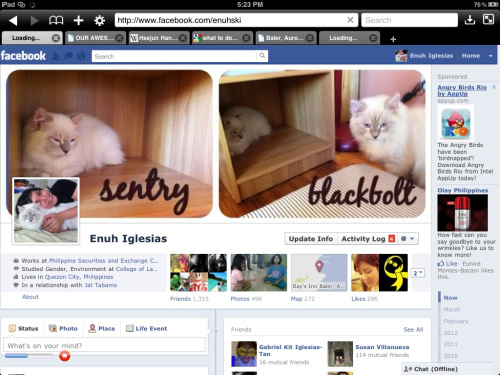 Part of the image, however, is obscured by your profile pic.
Update as of 01 April 2012: After testing it thoroughly, there is no way to directly change your cover photo via the app. What it does with the Facebook share function is to simply link your account to its FB counterpart and to upload the photo to the album created by the app. A word of advice, until such functionality is possible, save your cover photo to your camera roll first and upload to Facebook from there. It’s easier to change your cover photo this way and will save you a lot of headache, especially since the app doesn’t “remember” the last photo you made if you did not save it to your camera rol.
At the moment, there are no apps I’ve found that offer the functionality that this app has. When similar apps come out, then we will be able to compare Cover Photo Maker against its competitors in terms of its features and functionality. However, as it is, the app already does a lot and more, minus the bells and whistles.
This app is highy recommended if you are on Facebook and have an iPhone or iPad. It’s a must have, so grab it while it’s on sale for less than a dollar til the end of the month! 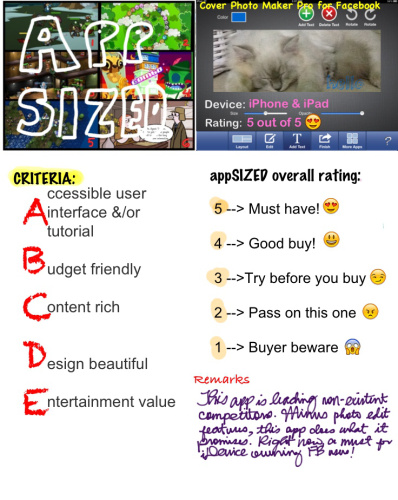