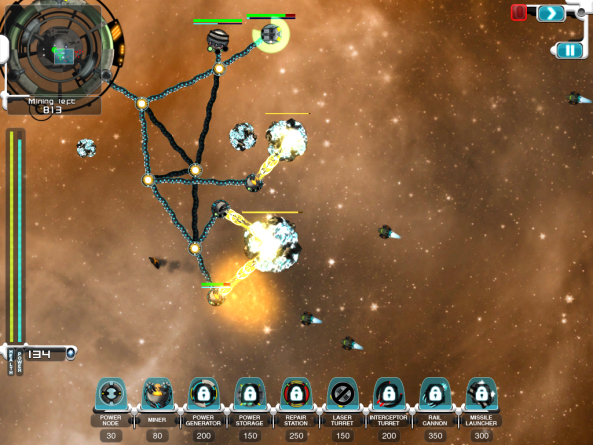 Space Station: Frontier was one of the highly anticipated iPhone ports to the iPad as soon as the iPad was announced. Even when it was launched for the iPhone, and even in its miniaturized form, there was something about it that signalled it was meant for bigger things – literally and figuratively.

Space Station: Frontier is, at its core, is a sci-fi strategy game with elements of tower defense and real-time strategy. It’s completely neither one nor the other, and it’s more than just the two combined –  it’s unique. Here you play the role of overseer in conducting mining operations while fighting off enemy ships coming from any and all directions seeking to sabotage your operations. On top of generating resources to fund your weaponry, you also have to do some serious strategizing for resource management and waging tactical battles, which believe me, will send you into a panic after the first few waves.

In many ways, Space Station: Frontier HD is still a blown up version of the iPhone game, with the familiar elements of campaign, survival mode and the shipyard where you can purchase upgrades after earning credits from playing the other levels. Power nodes are linked together to the station base in order to power mining modules and defense weapons. The tricky part is designing your power networks in such a way that you maximize your mining operations while keeping these vulnerable areas well protected.

On a bigger screen, it’s simply perfect as it is easier to appreciate the complexity of your actions and operates while multitouch keeps navigation, zoom-in and panning simple with a few taps and swipes.

Then and now, the mechanics part is still not that clear to me, with respect to purchasing upgrades and the general flow of the storyline but I’ve been able to muddle along. The less structured approach to the game also sets is apart from its rigidly designed TD/RTS cousins.

When I tested the iPhone version blown up on the iPad, the original Space Station: Frontier looks and works well on the iPad. I am hoping for iPad-only features and additional game modes to distinguish it from its miniature cousin. Nevertheless, if you missed Space Station: Frontier the first time, you should not hesitate to get it for your iPad now. Don’t blame me if you spend a significant part of your waking hours playing it on autopilot!

What do you think? Do you want to add Space Station Frontier HD to your apps collection?

Verdict: Complex, solidly designed and thoroughly engaging, it’s one of the best tower defense/RTS games on the iPad.