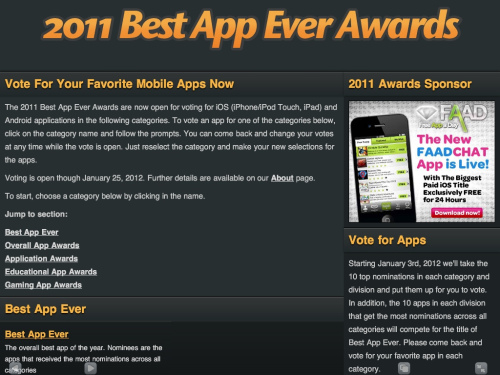 The 2011 Best App Ever Awards is a great way to recognize our favorite games and apps as well as discover new ones from among the nominees. In its fourth year running, a staggering 287,643 nominations were placed by users at the site between November 22nd and December 31st, 2011. This year, apps for the Android are up for nomination, with the ultimate showdown of iOS vs. Android for Overall Best App Category winner. There were 7,243 apps submitted for nomination and whittled down to 1,692 final nominees. In fact, 76% of the nominations are for iOS but the rest are for Android apps, reflecting the growing number of Android apps. Publisher Gameloft leads the pack with 42 nominations (both platforms) but overall there are 1,336 different developers whose apps are nominated. After all these impressive numbers, why should you vote? The App Store’s best app picks are quite limited in terms of categories and quite debatable. For example, Game of the Year picks vary wildly across review sites and forums, and if you feel strongly about your favorite, this is the perfect venue to give yourself a voice. In addition, you might be pleasantly surprised to discover new apps you may not have heard about but are rated highly by other users. Finally, it’s a great way to give kudos to our hard working devs for coming up with awesome apps that make our lives easier, and the world a better place. Check out this link to cast your vote.