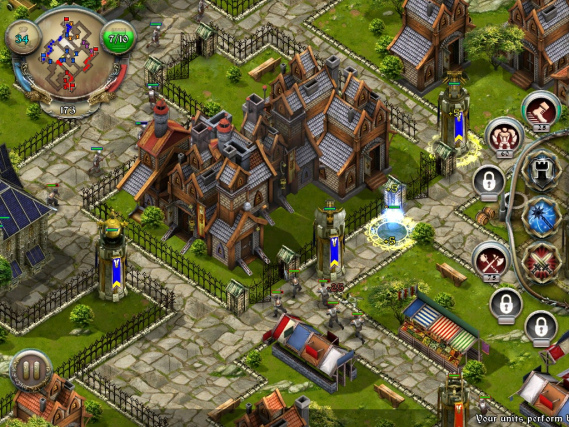 Defenders of Ardaniapackages itself into a tower defense game but it is much more than that. Drawing from the quirky and magical world of Ardania first seen in Majesty: The Fantasy Kingdom Sim (lone purveyor of the indirect real time strategy game), this game offers a unique challenge: can you defend and attack at the same time? 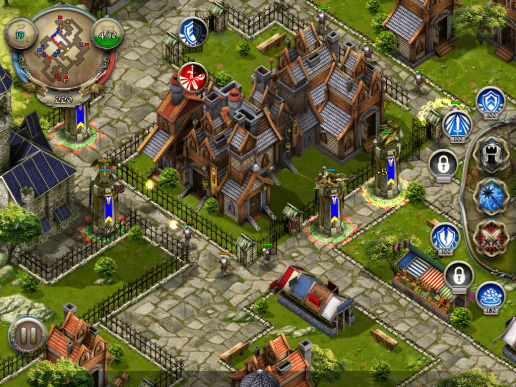 The challenge sounds simple but it’s a lot more complicated than that. Unfortunately, with a barely there tutorial, you will feel lost the first couple of times you play this game. I am begging the developers to redesign the tutorial to make it accessible to old timers and more importantly, newbies to the genre.

It’s the Campaign mode that makes Defenders of Ardania stand out from its TD counterparts. Here, you must be able to attack and defend simultaneously. Tower defense is done by building and upgrading towers to fend off enemy units, while offense or attack mode is by sending and upgrading your units (the more of the same kind you send, the faster they upgrade) to defeat the enemy base. You can only build a limited number of towers and the more you build, the more gold required to maintain them (thus, it would be better if you can capture money pools to increase your income). Repairing towers and casting spells also eat up a chunk of your gold. Due to limited resources and a seemingly endless onslaught of enemies, you have to choose between fortifying your defense first or aggressively attacking the enemy as a better strategy. 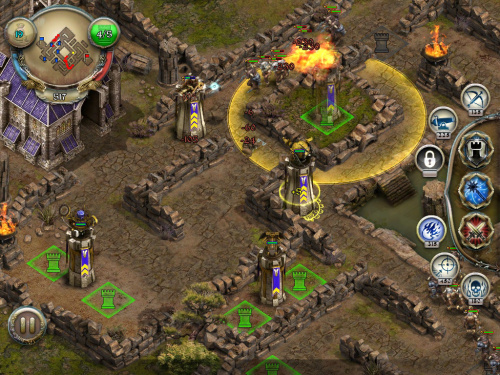 If you want to cover familiar ground first, playing “Defend” mode will provide you the usual TD mechanics. However, the nice thing is, you can choose from human, undead or earth races. Each race has its respective strengths and effects on enemy units. For example, human units offer cheaper towers while the earth race offers an attack boost on your units. I recommend that you try Defend first before going into campaign mode so that you’ll be familiar with the towers and magic skills you’ll be using all throughout. 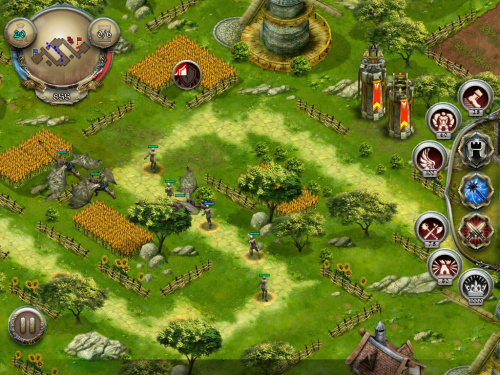 Skirmish mode allows you to battle the computer in a no holds barred battle, without limitations, unlike in Campaign mode. Challenge mode, theoretically, allows you to challenge a friend in real time battle via Game Center but there seems to be a bug preventing Game Center log in. I hope this will be fixed soon as I am eager to challenge friends who are likewise hooked on this game.

The graphics are nicely done, offering a more picturesque kingdom compared to the retro stylings of its predecessor, Majesty: The Fantasy Kingdom Sim. However, other than the different color health bar above the head to distinguish a friendly from an enemy unit, it’s not easy to tell them apart (especially when you’re playing for the first time) since the units are identical, whether it’s a human, undead or earth race. I hope the developers can tweak this to make identification a lot easier.

Be warned though, that difficulty-wise, the campaign mode in Defenders of Ardania is challenging, in a you-want-to-tear-your-hair-out kind of way. It will take several tries to finish a level, and even when you think you’ve mastered the gameplay already, a new level will keep you stuck for some time (as in my case!). However, the other game modes may be a little too easy for some, and rather slow, so a standard forward button to speed things up would be a welcome addition which is usually found in TD games.

Defenders of Ardania, once you figure it out, offers a very solid gaming experience, unlike anything available out there. This is why it landed on appSIZED’s Top 10 Games of 2011.  Defenders of Ardania offers much more depth than your usual TD game, and the unique gameplay will hopefully inspire a new wave of TD games that will break out of the genre’s formula.

appSIZED RATING: Highly recommended VETERANS: Highly recommended for TD fans looking for something new and with more depth. CASUAL: Spend some time on the tutorial/learn by trial-and-error to guide you through the game. NEWBIES: Buy with caution due to rather inadequate tutorial. Safest to play “Defend” mode and take on Campaign from there.