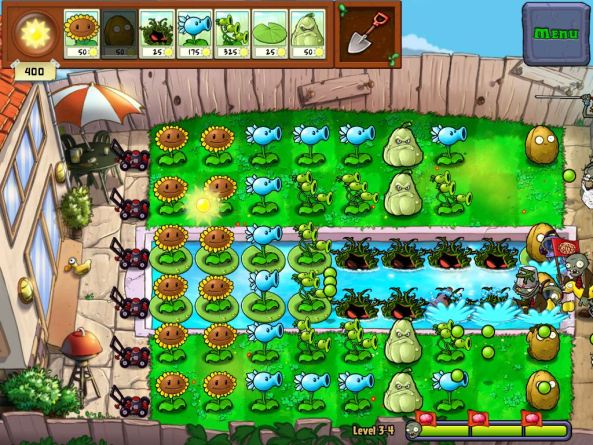 Plants vs Zombies is one of the, if not the most popular PC to iPod Touch/iPhone/iPad port yet. Adopting most of the elements of the PC game, Plants vs Zombies HD is a tower defense strategy game that’s irresistibly cute. Taking the overused concept of defending yourself from waves of zombies, Plants vs Zombies is all about tinkering with a formidable roster of innocent-looking plants that shoot down a diverse set of zombies in a variety of creative, colorful and humorous ways. You have 49 different plants to collect and 26 different zombies of different stripes – whether it’s an ex-football player, a buckethead joe, or my favorite, the Dancing Zombie complete with back up dancers straight out of the Thriller video.

Surviving all 50 levels on the Adventure Mode is a must before you get to unlock the mini-games and bonus features such as Quick Play and Survival Mode. You battle the hilarious undead in a number of settings – whether it’s day or night, shrouded in fog, or on the roof. My personal favorite is watching the zombies swim in the pool complete with floats, dolphins and diving equipment!

There are 18 different mini-games (including an iPad-specific mini-game, “Buttered Popcorn”), and iPad specific achievements as well. Again, conspicuously absent from both the iPhone and iPad is the Zen Garden and Puzzle Mode – something fans are still petitioning for inclusion in the next release.

Plants vs Zombies HD takes full advantage of the bigger screen and multitouch features, offering a truly different experience on the device even as against its original PC version. The graphics are gorgeous and the animation is much smoother compared to the freezing/lagging on the iPhone and iPod Touch which usually happens at later levels when zombies are filling up the screen. Some parts strike me as a bit pixellated though, particularly when new plants are unlocked.

The gameplay is smoother than ever. I did notice, however, that the level of difficulty is not as challenging as I expected. Perhaps it’s in part due to the relative ease of setting up defenses thanks to multitouch versus the iPhone version, which felt more challenging, since it limits you to setting up one plant at a time.

What I love most about this game is its wacky sense of humor and little bonuses showing a lot of thought was put into the game’s concept and development. The almanac of plants and zombies is an enjoyable read, and the visual and verbal puns scattered all throughout the game make it stand out from the rest. User reviews on the App Store vary from the highest praises to a litany of complaints over the pricing of Plants vs Zombies HD.

This is interesting and ironic considering most users found the $2.99 pricetag on the iPhone version (including myself) as shockingly cheap. In the same breath many are complaining about the $9.99 price tag. I honestly feel that the $9.99 is a fair price regardless of whether it’s just a difference of pixels or as some put it, a PC port with minimal effort and less features.

I also don’t think upgrading is a viable option since the HD version was specifically designed for this device and offers iPad only treats. Still, I do hope for calibrated levels of difficulty and bonus features from the PC version. All in all, Plants vs Zombies is the kind of game that’s great on any device. It’s the definitive game for your iPad.

Verdict: Seriously, you can’t NOT get this if you own an iPad. ‘Nuff said. Go get ‘em Brainszzzz.