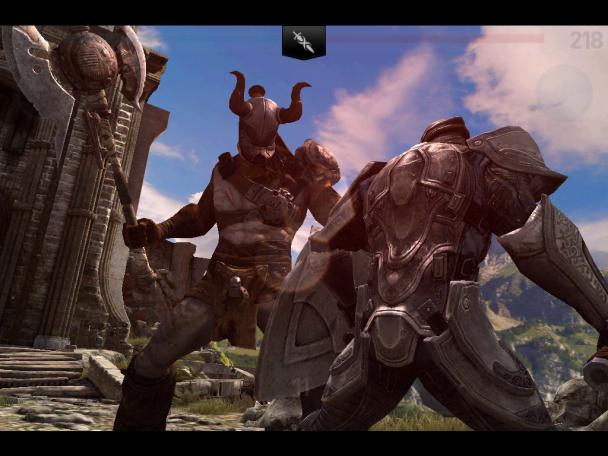 The stunning visuals, mysterious and complex storyline, elegantly simple controls and focused, one-on-one combat made Infinity Blade phenomenally successful. Sink your teeth into this incredible sequel, and see for yourself why Infinity Blade II raises the bar even higher for iOS and mobile gaming.

The tyrant god-king, wields the extremely powerful Infinity Blade to perpetuate his reign and draws strength from our hero’s bloodline. Infinity Blade was a never ending cycle of fighting enemies and gaining strength in order to ultimately defeat the god-king. In the hotly anticipated sequel, Infinity Blade II, the storyline delves deeper into the mysterious Deathless ones (introduced in the first, via complex route of exploring the game’s secrets) and our hero’s mysterious origins. Our hero seeks not only to avenge the death of his father (Infinity Blade), but also free the Worker of Secrets from the hands of the Deathless, in order to learn the truth about himself and his bloodline.

What makes the Infinity Blade series a mind-blowing piece of work is a combination of several factors, of which the stunningly beautiful art is just part of the bigger picture. Unlike most action/RPG adventures that often put a premium on melee fighting, Infinity Blade focuses on the lost art of hand-to-hand combat. Instead of facing a horde of mindless enemies, all your energy is devoted to taking down enemies, one at a time. 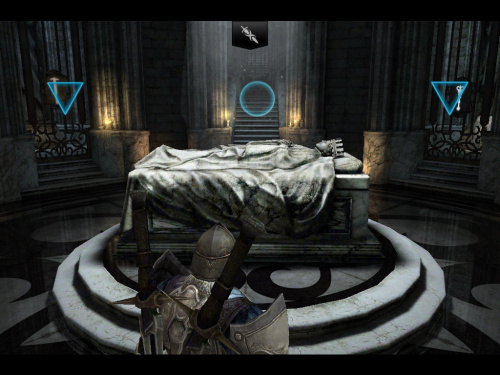 Basically, the game is played out in episodes, or “bloodlines” wherein you go to a location guarded by titans, pick off your enemies one by one and encounter a member of the Deathless (in the original, it was always the god king in the end), after which, you wake up from the encounter and start a new “bloodline” – and so on. Infinity Blade II is more complex than the original “loop”, with a number of locations to choose from which you cannot explore all at same time within one bloodline. 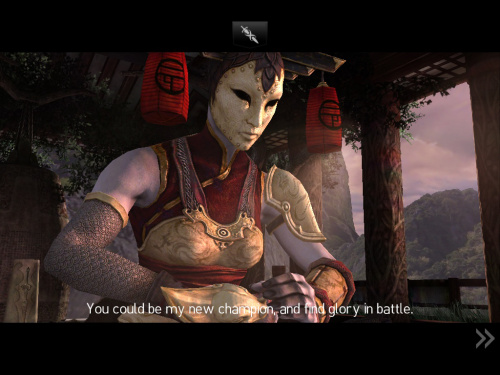 The complexity of the storyline is a stark contrast to the elegantly simple game mechanics and controls, which make full use of multitouch the way an iOS game should. The game emphasizes the importance of smart moves and impeccable timing, by using taps and swipes to parry, dodge and block blows. A second too early or late will cost you your health, and with more powerful foes, even your life. (On a different note, I feel that either the difficulty level in Infinity Blade II is lower than the original or I’ve gotten better) Thanks to the new weapons system, there are even more ways to score combos.

The RPG (role playing game) aspect is deeper and complex compared to the original Infinity Blade, with the introduction of weapon classes (light, heavy and dual) and gems with different properties that enhance the performance of weapons, shields and helmets. (You can even change the name of your character in the settings menu.) You use in-game gold earned from battles to buy these items, use real world cash to buy gold if you’re impatient, or wait for drops. Throughout the game you will get a chance to collect gold, expensive gear and inventory items through loot drops, so keep your eyes peeled for bags of gold, keys to open loot chests, healing potions and weapons scattered in various locations. Despite the numerous options, inventory management is fairly easy and you can even compare items in terms of stats. “Mastering” or earning experience points (XP) for individual items is also a great feature, an incentive for you to maximize your weapons instead of just aspiring for more expensive and powerful gear.

An interesting new feature is the XP bonuses, wherein performing (e.g. Do 10 parries) or refraining from certain acts (e.g. not use magic to defeat the Titan) earns you additional money and special experience points. 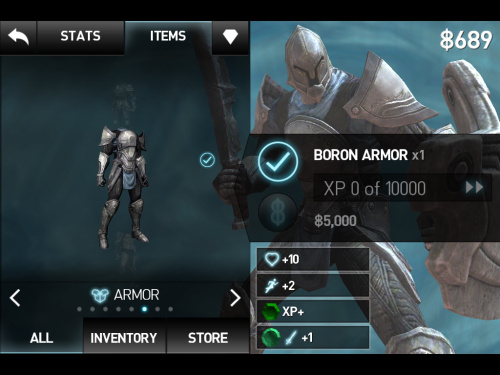 Much like its predecessor, Infinity Blade II is nearly perfect in every way – from the beautiful visuals to the core gameplay, which is but an expansion on the already inspired original game. The one thing I don’t really like about the game is the decision to switch from a brilliant voiceover in a mysterious, unfamiliar lanaguage with subtitles, to plain old English. Add to the introduction of female characters (yay!) and the transition feels awkward.The voice acting in Infinity Blade II is earnest, but hearing the rather corny dialogue in English (which otherwise sounds cool in a mysterious foreign language) detracts from the experience somewhat. It’s a minor quibble, but I really hope the developers will bring back the old foreign sounding voiceover and just offer the present English version in the settings menu.
There are some bugs with this release, however. When I first installed the app, the ambient sounds were present but the sound effects were missing. A simple restart of the device will set things right, but the crashing issues on the 1st gen iPad are more serious. Fortunately, a fix is on the way already available, as with promising future updates (Clashmob, more titans, more stuff and other surprises), all freeof charge.
Despite the arrival of an awesome successor, Infinity Blade is a groundbreaking game that has not lost its relevance. Infinity Blade is full of secrets coded into the game that are a delight to discover, and I hope that the developers did the same for Infinity Blade II.
As a fairly young gaming platform, gaming on the iOS has oft been criticized for not being quite there yet compared to their more advanced PC and console counterparts. Some iOS titles, particularly PC ports, have yet to fully transition conceptually from using a mouse to utilizing the multitouch screen interface. Some have yet to fully envision a game that fundamentally works with and maximizes multitouch in new and exciting ways.
Some developers, like Chair Entertainment, have risen gloriously to the occasion, with Infinity Blade and now, the insanely great Infinity Blade II.
App: Infinity Blade II (Universal)
Price: $6.99
Copy: Purchased
Developer/Publisher: Chair Entertainment
Ver: 1.0
About these ads